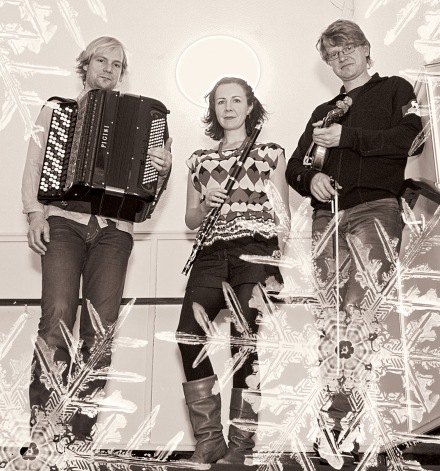 Snowflake Trio combines the traditional music of Ireland and Norway in a uniquely open ended way. Built in 2009 on an immediate musical rapport, they have developed an eclectic repertoire of exploratory music and song where no two concerts are the same. Featuring renowned Irish singer and flautist Nuala Kennedy, Norwegian hardanger virtuoso Vegar Vårdal and the genre defying accordion maestro Frode Haltli, a live show by Snowflake Trio is a rugged and spontaneous affair. To best put across its spirit for the listener, they have recorded a live album where a rich core of carefully selected pieces of traditional music from both countries is interwoven with freely improvised sections and newly composed melodies. Come celebrate the official U. K. launch of their debut record!

Yes – you don’t need to fix your glasses or ask your partner to read this again. Its true – we will present for you our brand new record during this year. On this record you will find our favorite tunes, and played with all the love and playfulness we can give. Stay tuned for more info – maybe we can give you some hint about the content before the summer?

Soon we are ready for some concerts in Norway – we start of with a concert deep in the finnish woods at 08t of june, and then we will head beack to Oslo and have a small concert at Biermannsgården the 09th. Friday 10th we will play at Geiteberg Folk Festival, and the whole weekend we will stay there and try to record some tunes to our new CD. Stay tuned for more info :-)

We started the tour in Norway with a concert as south we can get in Norway, in a house near Lista Lighthouse. The local jazzclub in Farsund invited us out to Lista and wanted us to do a concert in a privat home – and of course! We love this kind of contact with the audience, and what a atmosphere there was during that concert! The next day we went to Bakgården in Arendal and had a concert in the dawn with, and as you can see from the picture – the audience paying attention to not only Vegars stories :-) It was a great concert, and we got also a good review in ablikk (in Norwegian).

The next day we came to Bø in Telemark, and prepeared us for Telemarkfestivalen. We had one short element in the opening concert, and one hours show later on in the jazz-club Vertshuset. What a warm welcome for us to this festival, always nice to play for this festival. Now we are preapering for the next tour, nothing decided yet – but we are planning the futere … 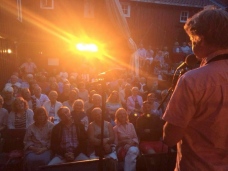